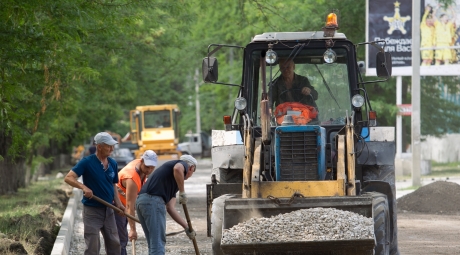 Within last 20 years the company «Sheriff» has been actively involved in the construction work. The construction of a new surgery started last year with “Sheriff” bearing all the expenses.
Nowadays there are 10 blocks in the territory of the Republican hospital with more than 30 medical departments. People from all over republic come here to receive medical treatment. There has been a long necessity to open new surgical department, satisfying up-to-date requirements. The department that will allow to give timely medical carе to the bigger number of patients.
It will be three-storey building with 180 beds. The facility is implied to be put into service in the end of the next year.
Except permanent buildings and facilities construction the company has been involved into road repair works. Last year dozens kilometres of asphaltic high road were laid in the villages of Dubossarsky region, in the place Novotiraspolsky, and also 7 km of road at the cemetery Zapadny in Tiraspol.
This year the company finances the repair of 12 sections of the road in Tiraspol. The choice of materials for the road surface was made in favour of sound imported materials with granite components.  The works have already been started and at the moment they are finished in the street 9 January, Lenin, boulevard Gagarin, Shevchenko from Karl Marx up to K.Liebnieht. The works will be performed also at the sections of the streets: 1 Maya, Krasnodonskaya, 25 October, Mira, Odesskaya, К.Marx and side street Schuseva. The contractors plan to have finished the works by the end of summer.